(Edit: Coincidentally, Tyler Cowen posted a wide-ranging conversation with Appiah this week as part of his Conversations with Tyler podcast series, which touches on Cosmopolitanism and Appiah’s broader biography and career. Highly recommended!)

Given the ongoing resurgence of nationalism that has taken hold of societies across the world, Kwame Anthony Appiah’s Cosmopolitanism (published in 2006) can either be considered to have aged terribly or only become more relevant. No matter where you sit, It’s hard to not see Appiah’s text as prescient and worthy of consideration. 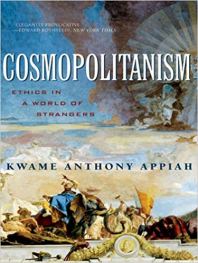 Cosmopolitanism: Ethics in a World of Strangers, by Kwame Anthony Appiah (Norton 2006)

Cosmopolitanism is a concept that was born as a critique to the catch-all and supposed inevitability of globalization, and addresses our individual responsibilities when engaging with the world around us. Unlike globalization, where all values, countries, and cultures converge into a single entity based on our increased exposure and exchange, cosmopolitanism sees our increased engagement with the rest of the world leading to a developed familiarity with the similarities and differences between our societies, leading to increased understanding, compassion, and fraternity with peoples across the world.

Appiah’s arguments, while laden with examples of his native Ghana and other places from around the world, are still grounded in the reason-based appeals that separates philosophy from other, daresay more approachable disciplines, which makes the book a bit of a slog to get through.

However, in just under 200 pages Appiah addresses a wide range of issues that impact modern cultural exchange, such as the repatriation of museum artifacts, the practice of circumcision, and the existence of cultural imperialism (arguing that Hollywood and western culture does not have the pervasive impact its critics claim). More broadly, Appiah argues that making value judgments on local customs shouldn’t be examined as the ignorant versus the uninformed, explaining that cultures tend to imbue their own ethics and worldview on the media they consume (a recent example of this can be seen in Chinese consumption of American blockbusters, and vice versa via the recent Chinese blockbuster The Wandering Earth.)

The book briefly touches on the concept of “counter-cosmopolitans,” which he cites Osama Bin Laden and al-Zawahiri’s Al Qaeda, and their desire to see a strict adherence to their version of Sharia law, a theme that has only become more pronounced via the establishment of the ISIS caliphate.

Cosmopolitanism is definitely a worthy read for those of us looking for an affirmation of our curiosity about the world around us and further our openness to experiences that fall outside of our own, as well as people looking to explore the ethics around this cultural exchange further.