One of the primary criticisms levied against MBAs are their failure to produce post-graduate entrepreneurial activity, especially in the technology sector.

In fact, in Silicon Valley companies known to hire MBAs are those thought of as void of innovation, who have piqued in their innovation lifecycle, and transitioning into a “professionalization” stage of their company.

Gartner Hype Cycle of Innovation (Edited by Me in red) 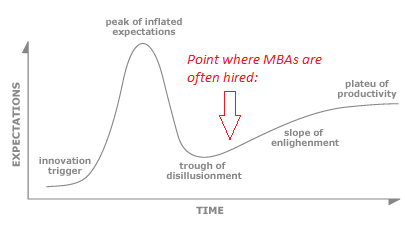 “Never ever hire an M.B.A.; they will ruin your company”  – Peter Thiel

“When M.B.A.’s come to us, we have to fundamentally retrain them–nothing they learned will help them succeed at innovation”  – Scott Cook, Founder of Intuit

“As much as possible, avoid hiring M.B.A.’s. M.B.A. programs don’t teach people how to create companies … our position is that we hire someone in spite of an M.B.A., not because of one.” – Elon Musk

As part of my ongoing research on the pros/cons of an MBA, I came across a conversation between Y Combinator CEO Michael Seibel and HBS lecturer and VC Jeff Busgang on how business schools can better prepare its graduates for tech entrepreneurship.

The conversation was initially prompted by a tweet sent out by Seibel, clearly demonstrating his frustration with MBAs when reviewing Y Combinator applications:

Michael’s frustration was that it wasn’t necessarily that MBA students are lagging in entrepreneurial activity – moreso, the question was why MBAs were not disproportionately better than the field of YC applicants, many of whom had little-to-no ‘credentials’ to speak of – “no formal training, mentoring, or experience” dealing with start-ups?

Paralysis by analysis, or the profile of the typical risk-averse MBA student

One of the primary takeaways of the conversation is the concept of ‘paralysis by analysis’ – the idea average MBA student tends to be a more risk averse individual, one that is more susceptible to waiting on the sidelines waiting for the “perfect idea” to strike.

“I think it’s just that MBAs, because of their nature, may be more likely to fall into the spending too much research time mistake as compared to a tech founder who is gonna be more likely to jump right in and build something. So, I think it’s not that these lessons are not applicable to all entrepreneurs. They’re applicable to all entrepreneurs. It’s just that MBAs are more susceptible to these mistakes, I believe.”

The chasm that exists between building a ‘minimum viable product’ (MVP), often the first step on embarking on a startup, and ongoing research is a vast one, and I think this point resonsated with me. When you’re solely focused on your idea or future company, the role and need for a MVP becomes much stronger, if not essential. When you’re a MBA student, especially a sought-after one at a top ranked institution, there are many attractive opportunities at your fingertips, and the need to justify the startup journey becomes even stronger.

When you are contemplating many possible futures, there becomes a much greater psychological hurdle / need to ensure that the idea you’re moving forward with (at the expense of more lucrative opportunities from an expected value standpoint) is “the idea” — hence the research overload.

Similarly, Michael cites a lack of commitment as one of his primary complaints against MBA applicants – the idea that MBAs are oftentimes dipping their toes into the start-up ocean, or wading in, as opposed to walking directly into the ocean.

As an aspiring entrepreneur with a corporate / consulting background, this point definitely resonated with me. There’s definitely a sea-change in disposition between a person with a day job, or even someone hedging several potential post-MBA opportunities simultaneously, and someone without an office space, business card, or any means of credibility ahead of them expect the plans in their head. In fact, many of the feedback that I’ve received of late regarding future entrepreneurial plans refer to the need to “just do it” – the mere act of removing oneself from the day-to-day mental hedge that a wide swath of opportunities provide is a crucial, if not the most important step in setting out on an entrepreneurial journey.

“Some dude in India’s gonna build this thing for me”

Another key theme of the conversation centered around Michael’s observation that MBA applicants are disproportionately likely to “outsource” the technical aspect of their (often technical) startup ideas or business models.

There is a perception of arrogance on Siebel parts – the relegation of the technical backbone of a business to an outsourced / contract coder, or not having a technical co-founder, but also an acceptance that this is oftentimes due to the limited exposure to technical talent in most MBA circles.

The conversation turns to a brainstorm of potential actions to try and remedy this:

Busgang’s ideas, maybe unsurprisingly, center around the institution, and revolve around creating more opportunities to connect MBAs with technical talent on campus – through double-degree engineering programs, coding clubs, entrepreneurs-in-residence (and their networks.)

Siebel, on the other hand, brings a more out-of-the-box idea to increase the technical proficiency of MBA cohorts: actively increase the number of seats in any given MBA class to students with engineering backgrounds – going so far as to propose a strict 50/50 apportioning between engineers and non-engineers. I’d argue this is increasingly underway, especially as admissions continue to seek out ever-higher post-MBA employment statistics (pre-MBA engineers going into consulting is a particular “home run” outcome, I believe.)

While the campuses and surrounding areas of MIT and Stanford are pointed to as hotbeds of this type of collaboration, where the technical- and the business-minded are more collaborative and accessible to one another, other locations are deemed to require more “hustle” to achieve similar ends.

However, as documented elsewhere, Google, Facebook, and others are in an ongoing battle to acquire and retain technical talent, keeping them “on campus” and presumably off the job / start-up market. As evidenced by the continued growth in compensation packages (and inventive “perks”), there continues to be a huge undersupply of readily available technical talent willing to forego a salary for an idea not of their own, as well asa nearly-unlimited supply of cash in the pockets of the tech companies.

“Not a positive credential”

The conversation concludes with a subject that’s been a reoccuring topic for me of late — for those interested in building / starting their own endeavor — is an MBA necessary, or can it be replicated by more relevant experiences in areas that you’re hoping to pursue.

The representative of the institution, Bussgang, is unable to refute this assertion directly, and reverts to the long-term worth argument (otherwise known as the “unquantifiable argument”) often made by MBA graduates – that over time, as you grow in your career, the value of the degree increases exponentially as your peers and MBA cohort increasingly ascend to higher positions and greater success in the business world. In addition, he points to the applicability of the curriculum to managers of companies undergoing “hyper growth,” or in other words, the type of “professionalism” cited earlier.

Bussgang takes off his lecturer / representative of the institution cap, and exposes his bias as a venture capitalist, a bias that is clearly shared by the CEO of Y Combinator, one of the most treasured credentials in the start-up world:

“I say to students, “Look, go to the top five, which are cities who happen to be in the middle of startup land cities, you know, rich innovation ecosystems, and that’s it.” I’m not sure I would go to others if I’m in the middle of a startup. If I’m trying to transform myself, who knows, but if I’m in the middle of a startup that’s going well in New York, or in Tel Aviv, or in Austin or in Silicon Valley, between, I don’t want to name a school to be negative, but if it’s a non top five school then I’m not sure you should go.”

The entrepreneurial / start-up track record of non-top 5 schools notwithstanding (something to research in a future post), this is a shocking admission to be so openly expressed – that an MBA, even in the top five, but especially outside of it, is not seen as a positive credential to venture capitalists. However, in my research it’s something that’s increasingly thought of as a consensus for the type of aspiring MBA able to reach the ‘vaunted’ heights of the top five (or M7, by less self-selecting individuals / MBA circles).

I do think that this mostly has to do with the opportunity cost of these individuals – as well as the post-MBA goals that are much more common at the top schools. But even at your Harvards and Stanfords, the experience of individuals who may want to escape their pre-MBA lives as consultants or bankers, and succumb to the need for a short-term return on their MBA investment, or the pressures of the MBA recruiting environment, and find themselves either returning to similar positions post-MBA, or find themselves luring to middle management positions at already-successful / late-stage / listed tech companies in big, target cities (colloquially bucketed as start-ups in many MBA circles I’ve run across). This is not necessarily a criticism, but moreso a reality proved out by the publically-available employment reports of the top schools – these statistics, collected and compiled as far back as 2011 in the case of Stanford, may be the argument against a MBA for those committed to a start-up.

One thought on “The case for/against an MBA”