Reading an author’s essay collection cover-to-cover, as opposed to picking-and-choosing essays of particular interest or jumping around, may seem like an overly rigid way of reading.

However, I’d argue that a book of essays, an author’s collected works, or even a collection of letters, when consumed as organized by the author and/or editor, provide a rare look inside the mind of a public figure or thinker, oftentimes much more revealing than even the most insightful biography.

The “payoff,” if there ever is one in reading, is not necessarily in the consumption of any one essay, but in the broader absorption of the interpretations of the varied topics and subsequent opinions of the author. Over the course of the book, it allows the reader to deepen their relationship with the author, better understand their influences, core ideas, and thought processes, especially useful in the case of fiction writers, who shroud these elements in the nooks of their finished works.

Attention by Joshua Cohen is a perfect example of one such collection – an assorted patchwork of essays, unfinished thoughts, digressions that represent an open notebook into his reading, travels, and mind. 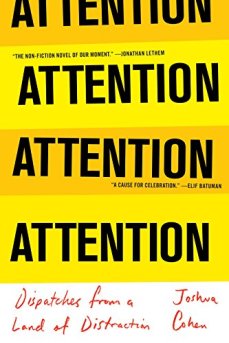 ATTENTION: Dispatches from a Land of Distraction, by Joshua Cohen (Random House 2018)

The topics covered are wide-ranging and culled together with little more intention than the authors’ own interests. As a result, some topics resonated more than others with me, especially the ones that mirrored some of my own interests and background.

True to the book’s subtitle, Dispatches from a Land of Distraction, many of these essays, even the best ones, have a similarly hasty, cobbled together nature to them, the works of a professional writer almost annoyed with his natural talent, seemingly preferring to do anything else but actually put pen to page.

One exception to this is a mid-book travelogue of a commissioned trip to one of the remote corners of the world, Azerbaijan, to learn about and meet the diaspora Jews of the region, known as “mountain jews” (truly proving the adage that Jews can be found anywhere.) Like many great travel writers, Cohen arrives in the country nearly spontaneously, with little more than a list of Azerbaijan Jewish towns and synagogues, and the name and number of a contact provided by an overly gregarious New Yorker met in a Brooklyn dacha (bathhouse).

The ensuing story, told in clear-eyed detail, is predictably hilarious, and captivating, despite minimal progress made in his goal and the vast chasm between Cohen’s intentions and the interlocutors he meets along the way – most tenuously Jewish, and nearly all seeking to profit from the interaction. This essay is the clearest indicator of Cohen’s massive ability as a writer, and would wholly recommend it to any curious parties (“Me, U, Baku, Quba” – Tablet Magazine).

Less successful are his attempts to play traditional essayist / columnist. In a series of essays at the beginning of the book, Cohen tries and tie together disparate concepts in a series of formulaic essays, using a concept relevant to the present day (or at least when the essays were published), and a follow-up series of seemingly unconnected, irrelevant, and under-examined topics, such as the Jewish history of US Socialism and the rise of Bernie Sanders, and the fall(s) of Atlantic City and Ringling Brothers Circus and national prominence of Trump (separate essays.)

A similar conceit was used in an essay published by Cohen in the September edition of the New Republic, “Israel’s Season of Discontent” (link) – there are some good ideas in there, but they seem almost besides the point of the article, which is written lesso to convince than to be consumed by avid readers.

It’s hard to find a review of a Joshua Cohen that holds back from marveling about Cohen’s intelligence, abilities, and talent, and I don’t plan to be the first. I feel fortunate to have had the chance to read this essay collection (less organized and cohesive than most), which provided something along the lines of a rotating kaleidoscope or funhouse mirror into the Cohen’s mind, rather than the popularly conceived “window.”