While on vacation this past week, I finished up Michael Reid’s Brazil: Troubled Rise of a Global Power, which, along with Alex Cuadros’ Brazilionaries, have served as an introduction to life in Brazil. Like Cuadros (and myself), Reid provides an outsider’s perspective on the country, having served as the Americas editor of The Economist from 1999-2013. 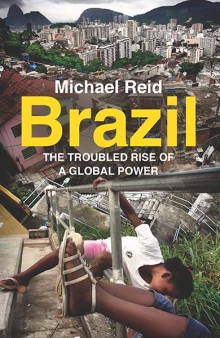 Michael Reid’s Brazil: The Troubled Rise of a Global Power

Reid’s Brazil is a companion volume to his previous book, Forgotten Continent: The Battle for Latin America’s Soul, which provided a history of Spanish Latin America and an assessment of the current state of the region. Brazil serves as a useful introduction to the country’s vast complexity and interesting history. The book was published in 2014 in the run-up to the World Cup and 2014 elections, though I read an updated, 2016 paperback version, which included a necessary postscript touching on Dilma’s re-election, the 2014 World Cup, and the (very) early stages of the Lavo Jato scandal.

The book is split into three separate parts:

Of course, fitting all of this information into a compact 300 pages is an accomplishment in itself, and anyone hoping for a deeper dive into any one of these topics is likely to be disappointed. However, I appreciated the brisk pace of the book leading up to the Cardoso/Lula years, which in total help to paint Brazil as a country that has underwent a tumultuous (yet mostly peaceful) path towards its current status as a dynamic modern democracy, albeit one with innumerable quirks and vestiges of its colonial and corporatist past. Reid this sums this up in the book’s conclusion:

“From colonial times until the dictatorship, an abiding preoccupation of Brazil’s leaders was to hold together a vast territory of difficult geography, where establishing communicators and the conditions for prosperous and healthy human life was enormously difficult. As a result, in Brazil it was the state that created the nation, rather than the nation creating the government, as it happened in the United States. It also meant that unlike in Spanish America, the rulers of the state were ever conscious of the need to consult local notables in order to conserve national unity and prevent succession. Slavery — and the fear of slave revolt — was another reason for the need for a united front. It also distorted the priorities of the state in ways that set back Brazil’s development for centuries, and condemned it to the status of the country of the eternal future. The tragic consequence of a society of masters and slaves was that the state, even as it set about developing the economy, failed to invest in the education, health, and safety of the great mass of poorer Brazilians.”

The book provides an interesting backdrop to better understand Brazil’s history of state-led industrialization, and more broadly the vast role that the state played in Brazil’s historic development, and continues to play to this day. Brazil’s most successful and popular leaders, Getúlio Vargas and Lula, both vastly expanded the role of the state in their tenures, looking ‘inward’ to improve the lives of the average Brazilians citizen. Underlining the tenuous unity within the country, both leaders, despite being massive popular and democratically elected, continued to appease Brazil’s all-important “coronels,” or regional power brokers that have played an outsized role in Brazil’s development since they were apportioned land by the Portuguese monarchy.

The book does a good job of providing a reasoned assessment of Lula’s presidency given its publication in 2014, when Lula was still regarded as the most popular leaders on Earth. Reid points out that Lula’s tenure capitalized in some areas from Cardoso’s monetary stability and the influx of foreign capital and strong commodity prices, while falling to address some of Brazil’s broader ailments. These include longstanding inefficiencies, lack of productivity, and a bloated system of spending that places a focus on advanced concepts (public universities, military spending, massive capital investments) at the expense of more basic investments (preschool and secondary education, healthcare and medical services, basic infrastructure). The juxtaposition of Brazil’s global competitiveness indicators have led many to colloquially label Brazil a “Belinda” –  Belgium for the Rich, and India for the poor.

I especially enjoyed a section that covered Brazil’s approach to foreign policy, including its capable and accomplished diplomatic core, its interesting and counterintuitive laissez faire stance towards its regional neighbors (no Brazilian leader visited another South American country until 1900, and until 1985, no Brazilian president stepped foot in Colombia and Venezuela), and Lula’s attempts to capitalize on Brazil’s size and success to transform Brazil into a regional power and into global prominence.

Riding a wave of popularity and economic strength, Lula muscled his way to a position of leadership in Latin America and the Caribbean, painting himself as the intermediary and a bridging voice between right-wing caudillos (Colombia’s Uribe / Santos) and leftist populists (Venezuela’s Chavez, Bolivia’s Morales), especially to global leaders mostly confused by the region. Lula’s efforts to broker nuclear and far-reaching trade deals, as well as his seeking out multilateral recognition through the UN (including a bid for permanent security council status) did not survive beyond his presidency, as his predecessor Dilma’s less charismatic presence and domestic concerns resulted in Brazil shrinking away from the global stage.

The book captures the almost-awkward position of Brazil towards the rest of the world – neither a natural member of Spanish Latin America, nor a steadfast partner of the United States as leaders of the Western Hemisphere, and an awkward fit with the rest of the BRICs, especially given Russian authoritarian and nationalist turn and continued Chinese expansion. Brazil’s strongest allies outside of the United States mostly date back to its Lusophone colonial origins, as well as a smattering of  neighbors: Argentina, Uruguay, Venezuela, Bolivia, South Africa, Angola, and Portugal. Famously, in 1970 US Secretary of State Henry Kissinger said to his diplomatic counterpart Antonio Silveira of Brazil’s newly designed diplomatic home in Brasilia: “it’s a magnificent building, Antonio, now all you need is a foreign policy to go with it.”

Brazil’s antipathy to the rest of the world has carried itself forward to today, as Brazil continues to exhibit an inconsistent and uneven approach towards global diplomacy – one more concerned with gaining attention (non-interventionist UN votes on Iraq and Syria, leading a peacekeeping mission in Haiti) than effect (Brazil has remained silent throughout Venezuela’s descent into failed state status, a failure given its status as a beacon of democracy and freedom in Latin America.) A diplomat quoted in the book summed it up well: “China is concerned with being, not with appearing. Brazil is obsessed with appearing, not being.”

In all, I found the book to be enjoying and worthwhile for anyone interested in better understanding the complexity that is modern Brazil. The author’s employer comes off a little too strong in sections: some of the latter sections focusing on specific industries or assessments of Brazil’s economic or political shortcomings read a bit too much like expanded Economist articles, and the author’s politics (mostly mirroring The Economist’s neoliberal take on things) come through too clearly in others, but these are minor quibbles. In all, I found it to be useful companion, and an excellent primer ahead of the 2018 elections here in Brazil.

3 thoughts on “Review – Brazil: The Troubled Rise of a Global Power”