Returning from a week-and-a-half vacation with my girlfriend to Salvador da Bahia and Rio de Janeiro, I was welcomed home by a barrage of non-work-related emails, totalling about 200, or roughly 20 / day. 90% of these emails required no action on my part, aside from reading them: the buildup was mostly from email subscriptions and newsletters that I had willingingly signed up for and amassed over the past ten-or-so years.

I consider myself to be far from a hoarder of email subscriptions – I’m fairly quick to unsubscribe from auto-enrolled mailing lists, and feel fairly discerning in trying to cull out email subscriptions that I don’t find genuinely useful. In addition, given my slow weaning off of social media (off Facebook since 2015, and finally gave up Twitter last year), email subscriptions serve a useful purpose in my attempt to “keep up” with the internet and the news cycle.

And while I’m hardly a compulsive news junkie (though maybe my girlfriend would disagree), I do like to keep up with the day’s stories, and oftentimes find myself learning or being captivated by something on a daily basis. Even more frequently, I come across stories of interest that I neatly catalog for later consumption in my ever-growing collection of Pocket articles (surely upwards of 500), and / or add a thought or to-do from this web browsing. And then there’s the articles sent to me by friends or family, based on their perception of my interest, all meriting a read and response.

But then again, maybe I’m just rationalizing a compulsive email / news habit. As we’re continuing to learn, the primary currency on the internet is your/my/our attention, and by giving in to these subscriptions and email newsletters, I’m consciously sacrificing my personal attention to the “push” of internet / media businesses, aggregators, and tastemakers and in favor of more pointed, personalized inquiry.

As a first step in taking action against this barrage of email subscriptions, I’ve tried and break them down into the following broad categories

a) Daily news digests: A compendium of the day’s news, similar to the experience of reading the morning front-page (and for me, the business and sports sections). Linked articles of interest are oftentimes opened and read immediately, or later that day.|

b) Blog roll / RSS Subscriptions: Mostly a vestige of my past Google Reader usage, blog entries from longtime favorites. These normally point me to other links / information to be saved & cataloged.

c) Weekly News Round-ups: Weekly summaries of news magazines or weekend-only features of newspapers. These are mostly consumed over the weekend, and oftentimes provide a longer view on the week’s events (similar to the concept of John Oliver’s Last Week Tonight) or a respite from the news cycle (reviews, etc.)

e) Promotional / Marketing emails: These serve as little nudges to remind me to patronize businesses that I respect, take care of things I’m putting off (e.g., booking travel) and take advantage of special deals.

Going through the process of cataloging all of these separate email subscriptions shines a further light on my need to cull these down to a more manageable level, or maybe do away with the majority of these subscriptions altogether. Trying to fend off the onslaught of incoming emails and endless array of links “of interest” almost turns into another job, and I oftentimes find myself devoting a portion of my weekend to “catching up” on the week’s news and accumulated links (the best of which I try and highlight in my weekend reading.) In addition, the attention and effort required takes me away from more meaningful, long-form / book reading and study, including making a dent in my ever-growing list of books to read, and taking some of the courses on topics that I’d like to better understand.

It really does feel like a bit of an addition when it is laid out and explained this way, at best a bad habit, and one that I have the agency and ability to correct.

Reading a passage from Tim Ferris’ Tools of Titans over vacation, I became acquainted with the concept of “email bankruptcy” — the act of delete-all-ing one’s entire inbox, and letting the consequences of this action (follow-ups, or more often than not the lack of follow-ups) dictate your actions, as opposed to being in a permanent state of email debt (read or unread.) Albert Wenger’s World After Capital highlights the increasing importance of attention in our age of information bombardment, and the need to filter your consumption (and production) to achieve economic, informational, and psychological freedom. I think this diagnosis serves as a helpful first step towards better developing those muscles of discernment, and the broader filter.

Right now, I feel somewhat panicked by the prospect of giving up some of these treasured sources of information, but I think even by starting small (10% less? Getting rid of the daily emails?) will serve to free-up more time and attention to devote towards personal and professional goals that I’m hoping to accomplish (if not begin to think through.) Hopefully I’ll be able to report back on my progress, and its resulting impact on my time, attention, and mental well-being.

Somewhat ironically, the following image was one of the many emails that greeted me upon my return from vacation – from the NYTimes’ Behavior Gap. I’m not quite sure I’m ready for a complete media fast, and I don’t think the correlation is quite one-to-one, but nonetheless, it’s a helpful (and timely) reminder, and one that I plan to actively heed in the coming months. 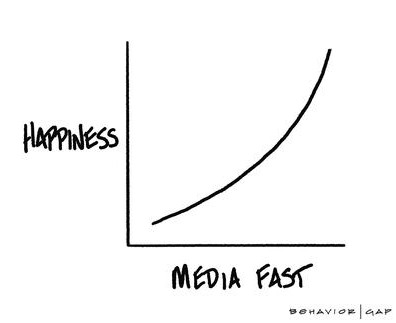 One thought on “Turning it off: On email debt, and potential bankruptcy”