For whatever reason, I’ve worked my way mid-way through a ton of books recently, without the urge to finish them, let alone write about them.

Below I’m going to attempt to share some thoughts and capsule-reviews of some of those books: 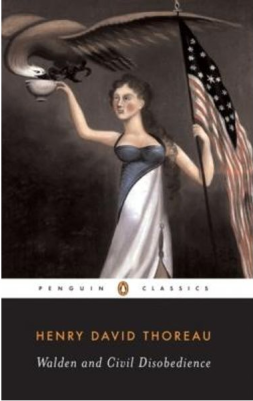 I initially started this book over the summer while on vacation in the American West (along with the more readable Fourth of July Creek). After making a significant dent in it from Montana to Colorado, I’ve plodded through it since. I still have a bit left to go in Walden before embarking on Civil Disobedience (reading the Penguin Classics compilation of the two).

My primary impression of reading Walden was Thoreau’s attempts at rationalization, followed by a personal sense of recognition.

The first third of Walden almost reads as a letter written by a runaway to their loved ones: Thoreau explaining his decision to “leave it all behind,” foregoing the busybody grind of 19th century Massachusetts by selling his possessions and squatting on Walden Pond, where he constructed his own home and created a new way of life for himself. Thoreau seems almost too self-assured, convincing himself as much as the reader of the rightness of his decisions.

Early in my reading of Walden, I felt compelled to research a very specific fact about Thoreau. Reading Walden felt very familiar: his disillusionment with the ‘real’ world, his desire to find meaning in the day-to-day, and his fatigue with keeping up with the news. Sure enough, Thoreau was 28 when he embarked on his journey (though Walden wasn’t actually published until 1854, 10 years [and 10 drafts] later.) Being 28 myself, I couldn’t help but feel kindred in Thoreau’s desire to take stock of his post-schooling life, evaluate the social contract of American adulthood, extract meaning from the mundane, and set out on a path of intention, observation, and discipline.

We Cast a Shadow, by Maurice Carlos Ruffin

Ruffin’s debut novel is a satire on race in America in the vein of Paul Beatty. My girlfriend, an astute observer of my reading habits, sent me a copy of the galley in advance of the January publishing date (for One World!)

The book has a lot going for it: it creates a cutting postmodern New Orleans / Louisiana dystopia, stratified and segregated in a way recognizable all too reminiscent its past (both historic and more recent), even present. In addition, the protagonist is a credible picture of a striving careerist enduring daily humiliation and a slow degradation of his identity and past as a Black Man.

However, my struggles with the book fall under the fine line(s) between satire, humor, and fiction: a delicate balance between incisive commentary and humor while still advancing the story and creating well-rounded and multi-dimensional characters. The book is enjoyable, but I find the balance a bit overdone on the former at the expense of the latter.

Diary of the Fall, by Michael Laub

I’m trying to make a meaningful effort to read more Brazilian / Latin American fiction while in Brazil, a habit that I’m sure will only be realized when I eventually return from the region. This effort is complicated by the fact that a large majority of Brazilian fiction isn’t translated into English, with the exception of a few modern authors (Daniel Galera, Chico Buarque), and the classics (Lispector, Amado, de Assis, etc.) I haven’t taken the brave leap to try and read in Portuguese, which will only open up my world to the vast universe of Brazilian literature.

Michael Laub’s Diary of the Fall is a slim book translated by Vintage in the UK based in incredibly familiar territory: it is an autobiographical novel written by the grandchild of Jewish immigrants and Holocaust survivors that touches on the protagonist’s experience growing up among Jews and non-Jews: first in a private Jewish school, and then at public Middle and High Schools. Replace Brazil with the United States, and the book’s set pieces could be my own.

The book is ingeniously weaves together the divide between subsequent generations, beginning with the Grandfather’s immigration to Porto Alegre (Southern Brazil) following the War, his father’s experience witnessing his father’s retreat into his memories, and the protagonist’s experience as a grandchild of survivors. The book mirrors the journals kept by the protagonist’s grandfather, both early in life via his documentation of his new home in an attempt to learn Portuguese and adapt to his new surroundings, and later in life as a cataloging of his Holocaust experiences. Both experiences were kept in journals that were discovered by subsequent generations to inherit and attempt to understand.

The book is a beautiful depiction of families across generations, and questions our inherited identity over time. One of the beautiful things about reading non-American fiction is the ability to draw parallels to other’s experiences around this world. It was especially rewarding to read an experience so close to my own, one that truly could have been my own if not for the fates of our grandfathers, choosing new homes and building new lives in foreign places.

Meaningful Work: A Quest to Do Great Business, Find Your Calling, and Feed Your Soul, by Shawn Askinosie

As covered in a previous post, I continue to seek out opportunities to learn more about coffee in Brazil, the world’s largest coffee producer. While my enthusiasm remains unabated, I was kindly reminded by one of Brazil’s foremost coffee entrepreneurs that the coffee industry involves many different individual stages: cultivation, production, exporting, etc. One of my goals for the coming months is to build my understanding of the coffee trade, especially the commercial ties between the US and Brazil, and try and seek out opportunities to get involved to jumpstart my learning further.

Meaningful Work is an attempt to better understand how the practice of ‘direct’ trade works – the process of sourcing inputs directly from the producers themselves. In his book, Shawn Askinosie tells the story of waking up as a mid-40s criminal defense attorney to discover his inherent dissatisfaction with his job, and his desire for a true mission, a ‘vocation.’ Over the next few years, Shawn created Askinosie Chocolate, a speciality chocolate manufacturer that sources its chocolate from Tanzanian, Filipino, and Ecuadorian cocoa. Askinoise Chocolate grew from Shawn’s experience at a monastery, where he leaned into his sorrow following the death of his father, and his commitment to improving the lives of others for the second half of his career.

What makes Askinosie special is its committment to its communities, both in the local Missouri area where his operations reside, and the international communities where he sources his raw materials, and his work in tying those far-flung locales together. Through local investment and more specific, human-focused efforts (fellowships, planned trips, etc.), Askinosie tries to convince readers of the need to find fulfillment in one’s work, and how to seek out opportunities to improve one’s workplace and communities in any company.

The book is a convincing management book as well as a useful resource for those interested in getting involved in direct trade, or starting any business. It’s a useful reminder to emphasis our connection as humans above all, and not lose sight of our motivation and mission in pursuit of our ‘vocation.’

Winners Take All: The Elite Charade of Changing the World, by Anand Giridharadas 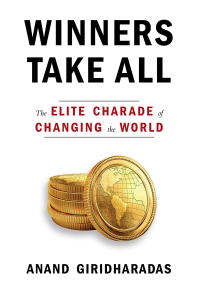 I initially came across this book from the Author’s podcast episode with Ezra Klein, as it covers a favorite topic of mine: exposing hypocrisies and illuminating the inner-workings of the powerful and much derided ‘elite.’

The book begins with a profile of a well-meaning recent college graduate pitted with the familiar challenge of trying to make the difficult decision between making a direct impact or succumbing to the argument increasingly made by the firms that recruit thousands of elite students across the world: gain the skills needed to ‘change the world’ in the finance or consulting industries, and figure the rest out down the line. The author points to the anxieties felt by the indebted millennial generation, and how these firms are seeking to blunt the transition into the ‘real world’ via ‘hiring classes,’ cohort trainings, and an established recruiting process. While this topic was blown into a full-length book by Kevin Roose (the underrated Young Money), the book’s strength is its ability to delve deeper into the underlying structures and systems that create this reality, versus Roose’s reportage.

The book targets its aim at a familiar punching bag: the so-called Davos ‘elite’ and the well-meaning but ultimately misguided or insufficient extra-governmental solutions for solving global issues. The author attends these multi-thousand-dollar conferences attended by the capitalist elite and rails against their use of language such as ‘revolutionary’ or ‘disruption,’ while serving as the source of much of the disruption in the first place.

However, as Klein gets at in his worthwhile interview with the author, aside from common prescriptions of more robust taxation of the rich and increased trust in government administration to solve problems, the book lacks many answers to match the increasingly common railings against inequality brought on by the tech industry and global capitalism. Then again, I enjoyed the incredibly relevant conversation and longer-form book. 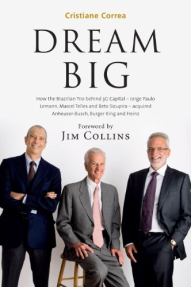 For someone working in Brazil and keeping track of the players at the top of the private sector, the book serves as a useful guidebook, names like 3G Capital, BTG Pactual, ABInBev, Jorge Paulo Lemann, and Marcel Telles. The latter two, along with their partner, Carlos Sicupira, exploded onto the national stage with their purchase of Heinz (along with Warren Buffet), and subsequent purchase of Burger King. Few were aware that these titans were already the owners of the Belgian-Brazilian-American brewers Anheuser-Busch InBev.

Both purchases have gone on to even greater success via scale-building mergers (creating KraftHeinz and Restaurant Brands International [BK-Tim Hortons]), and have become well-known for their brutally efficient zero-based budgeting cost cutting, and the massive incentives paid out to successful managers to incentivize and retain top talent.

In the vein of Buffett’s classic biography The Snowball, the book is a hindsight-laden chronological look at early risks, mid-career failures, and corporate / boardroom dramas. The book does a reasonable job of demonstrating the source of their management philosophies, and the individuals characters that collectively equal 3G’s collective success. The book definitely drags a bit at points (as any book about corporate turnarounds is likely to do), but it’s a useful history for those interested in learning more about the Brazilian entrepreneurs in Buffet’s orbit.

One takeaway that constantly fascinates me is Grant’s relatively late success in life. After a last-minute acceptance to West Point, where he was incorrectly recommended as Ulysses Grant and excelled alongside many future Civil War generals, and early heroics in the Mexican-American war, Grant spent much of his thirties poor and indebted, eventually working for his father’s leather goods store as a clerk.

It wasn’t until the Civil War that Grant’s skills as a military operator and strategic became highly relevant, and he rose within the ranks of the Union Army to become one of its foremost generals.

Chernow addresses Grant’s drinking from the book’s introduction onwards as a complicated, nuanced subject. Grant’s struggles with drinking are a recurring theme throughout the book, and the author contends with correspondence from Grant and those close to him chronicling his struggles with alcoholism.

While I have yet to make it through the Civil War and into his Presidency, I am enjoying the audio experience of the history genre, a sentiment shared by author Andre Dubus III in this week’s NYTimes Book Review By the Book